All You Need To Know (And Hasn’t Been Said Yet) About The Navy RQ-4A Shot Down by Iran Over The Strait of Hormuz. 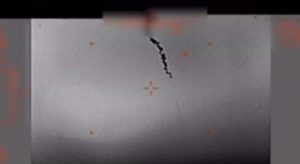 Footage released by US CENTCOM shows the smoke trail of the RQ-4A falling from the sky after being hit by IRGC missile system.

On June 19, 2019, at around 23.35 GMT, a U.S. Navy Broad Area Maritime Surveillance (or BAMS-D)demonstrator, an RQ-4A UAS (Unmanned Aerial System) used for testing and development of the MQ-4C Triton BAMS aircraft, was shot down by an Iranian surface-to-air missile system while operating in international airspace over the Strait of Hormuz.

Here’s the latest statement released by U.S. Central Command along with the below footage showing the drone falling from the sky trailing smoke………